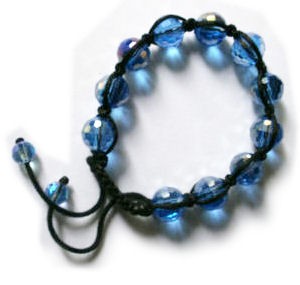 Shamballa bracelets are all the rage this year.
They are handmade beads on a piece of knotted rope with a slipknot, so they fit almost everyone.
These bracelets are worn by many Hollywood stars. Celebrities like Paris Hilton, Beyonce, Chris Brown, Justin Bieber have been seen wearing them

The meaning of Shambhala, also known as Shambhala is love and freedom.

What's the story behind Shamballa?

This beautiful Shamballa bracelets are of faceted glass beads, with mother of pearl luster.
They are strung on a black cord.
The beads are 10 cm in diameter