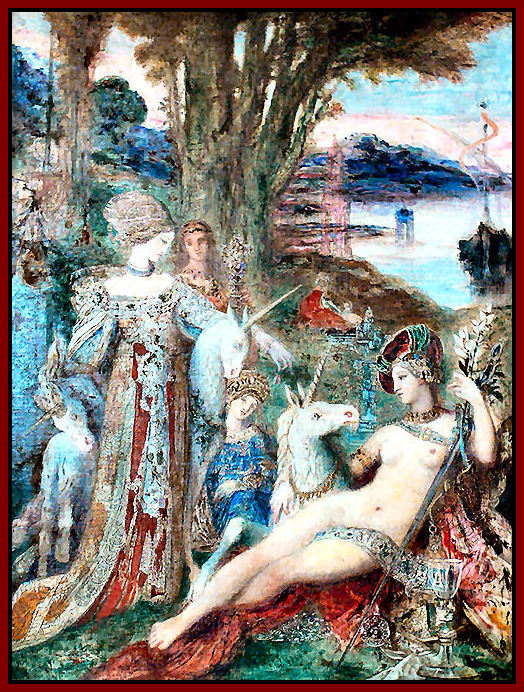 The unicorn is a mythological creature, which looks like a horse, but with a sleek, usually spiral horn growing from its forehead.
The popular image of the unicorn is that of a romantic-looking, white horse, but sometimes he is also depicted black, as in Gothic art.

Some unicorns have wings.
This idea of ​​it, probably has its origin in Pegasus, the winged horse of the ancient Greek mythology,

In medieval times, the spiral horn of the unicorn was called alicorn, and was thought to neutralize the poison.

People sold before, which she claimed to be unicorn horns.
What they actually sold, but were were Narwall horns.
(Narwalls whales are large, horn-like tusks that swimming in cold water.)
Or was it something else and just quackery.

Traditionally, the unicorn had a goat beard like a goat, a lion's tail, and cloven hooves.
Ironically, this perception is accurate, as only animals with cloven hooves have horns.
Unicorns were seen as nasty, embittered creatures, unlike the soft perception we have of them today.
They were thought to have wailing voices.

A widespread legend is that when Noah gathered two of every species, which he failed to bring under the unicorns in his ark, making them extinct now.

The Quilin, a creature in Chinese myth, is also called 'the Chinese unicorn,' but is not directly related to the western unicorn. The Quilin has the body of a deer, the leadership of a lion, green scales and a long foam covered horn. In Japanese, the word Kirin (written with the same Chinese ideograms) used both the giraffe and the mythical creature be identified. Although the Japanese Kirin is based on the Chinese myth, it resembles the Western unicorn than the Chinese quilin.