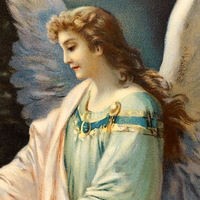 In Christianity, Islam and Judaism, act angels, as attendants or guardians to man, typically act as messengers from God.
They possess superhuman abilities and characteristics.

Angels are generally considered benign.
But there are also dark (Gothic), angels and fairies sometimes depicted, which have a link with the dark side of life.