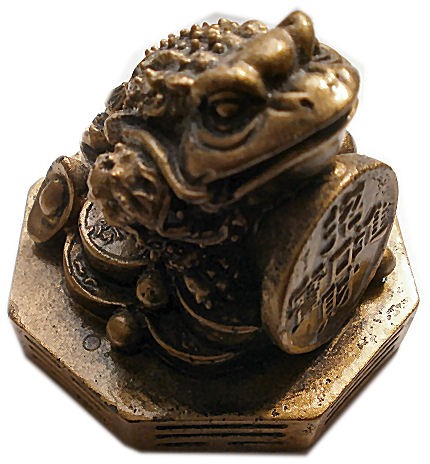 Feng Shui Money Frog (also called Three Legged Frog) is the divine version of the frog, which they have only three legs. It is considered the most important symbol of prosperity, riches and money blessings in Feng Shui. The Chinese legend says that the Money Frog was originally the wife of a legendary figure of the Goddess of the West (Hsi Wang Mu) the elixir of immortality received (an immortal elixir). The naturally greedy woman drank the elixir of immortality completely. She was punished by the gods of heaven that it turned into a three-legged frog and sent her off to stay at the moon.

Since then, where people see the Money Frog, sitting it on a bed of money about him, because this creature is naturally greedy and craves for money. For generations, this mythical Money Frog is the sacred animal that protects us from misfortune and every household larger enrichment promises riches. We are talking about creating abundance in wealth for serious Feng Shui practitioners.

Traditionally, the Money Frog is usually depicted with a Chinese coin in its mouth and sitting on many gold bars, coins and wealth.

1. For entrepreneurs who want to succeed, possesion the Money Frog is a must.

2. Need more prosperity and happiness, additional sources of income and career growth that eventually lead to more income. Place one, three, six or nine Money Frogs randomly in your living room or garden, so they spend a lot of wealth and money. They can be placed diagonally across from your front door. Treat them like frogs and not gods, so they can be placed on the floor but preferably place it on a low piece of furniture. They can also be placed under chairs, tables and sofas or other isolated places. If they are placed too high, they would be afraid to come down and so can not go looking for money. They also can not be placed in the bedroom, kitchen and toilets.

3. To invite and to double the income from a steady cash flow, you can put two Money Frogs on each side of the entrance of your home, but watch out with their heads facing inward, not outward, the money is directed inwards and not outwards!

Turtles are in Feng Shui considered as lucky charms. They are oneof the four sacred animals in Feng Shui (dragon, tortoise, unicorn and phoenix).
It also said that turtles symbolize longevity.