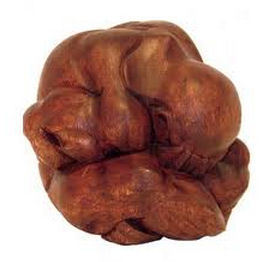 "The Yogi Man" originated in Java.
The story is about a man who was so ashamed of mankind that he
chose a life of meditation in the posture in which he is still known for.

It is said that Yogi Man weeps for the suffering on Earth. Als orang (-human) malu (-verlegen) would translate directly get shy person. The meaning of the word maloe = modesty.

Whoever passes the Orang Maloe will be influenced by his positive force beïnvloeden.Negatieve energies will be done away with and evil cleansed
Therefore, this is often put in the hall for people at home, at a place where all inhabitants and visitors pass.
It is intended that both the owner and the visitor gives Yogiman regular pat on the head.
The image has a protective influence. If you look after your Yogiman well looked after him and occasionally caress him,
he takes your worries away and gives you peace at home.