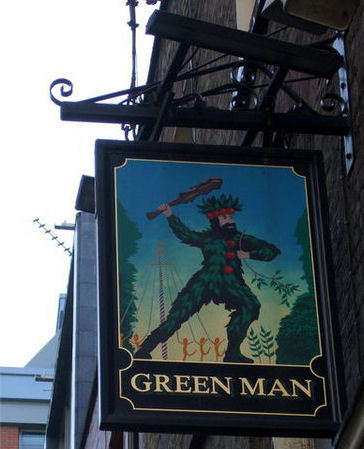 Photo - Ceridwen - Sign is from an old London pub

The Green Man (Green Man) is an image of a face, which mainly consists of leaves.
Lots of buildings in Europe have an image of a Green Man in their architecture, both in stone outside, as in carvings inside.
The often fierce-looking figure was applied to keep away evil spirits.

The origin of the image is probably the Gaelic Celtic mythology, though he later was taken over by the Romans and Christianity and is often seen in old churches.
For example, in a Scottish church, Rosslyn Chapel in Roslin at Edinburgh there are more than 100 images of the Green Man

He also often associated with the natural religion Wicca and he is seen as a symbol of nature and rebirth.

In England, the Green Man is a popular part of the tradition.
Quite a few English and Scottish pubs called The Green Man.

Today, this mythical figure is often found in the home decoration.