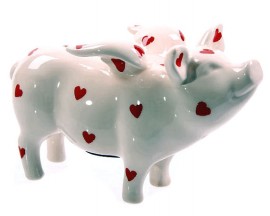 Money boxes for your cash savings, are available in many shapes and sizes.

One of the most popular variations is the PIGGY BANK.

This model has its origin in Germany. The piggy bank is the symbol of the greatest capital that the average German peasant family in ancient times possessed a pig. Purchased as a piglet, he ate was all waste which can be found in the yard and he was fattened, he was slaughtered and eaten.

This is the link to the piggy bank and the money that's in it. Traditionally, as a pig made of clay or ceramic, and it was also destroyed - broken beaten - he was full and its contents was needed.
Nowadays, there is generally an opening at the bottom of the jar, so that it can be reused.
In areas of southern Germany Piggy is still done as a gift Gluck Schweinchen, often at New Years. A newborn baby often receives a piggy bank for a long, happy and rich life.