HAND OF FATIMA - HAND OF MIRIAM

The Hamsa, or hand of Fatima, sometimes the hand of Miriam - Miriam, is a palm-shaped amulet, popular in the Middle East and North Africa.

The hamsa is often incorporated in jewelry and wall hangings, as a superstitious protection against the evil eye.

Hamsa is an Arabic word which means `vijf`, and applies to both the five fingers of one hand as the five pillars of Islam.

It is also known as the Hand of Fatima, named after Fatima Zahra, the favorite daughter of the Prophet Mohammed. 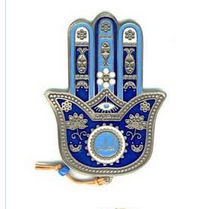 This Muslim talisman was passed to the Jewish community in the Middle East.

Jews retained the name Hamsa, but called the Hand of Miriam, referring to the sister of Moses, instead of the daughter of Mohammed.

The five fingers here symbolize the five books of the Torah.

In the Jewish hamsa is often incorporated a Star of David.

Another popular decoration in a Hamsa is that of a fish.

The idea is that fish marine life and therefore are immune to the negative forces of the evil eye.

Sometimes this is a rotating eye, with a blue and white bead, the typical colors of the Turkish Nazar or evil eye.

The symbol of the Hamsa and the evil eye, is commonly used in jewelry, both in combination with the Islamic crescent with star, as the Jewish Star of David.