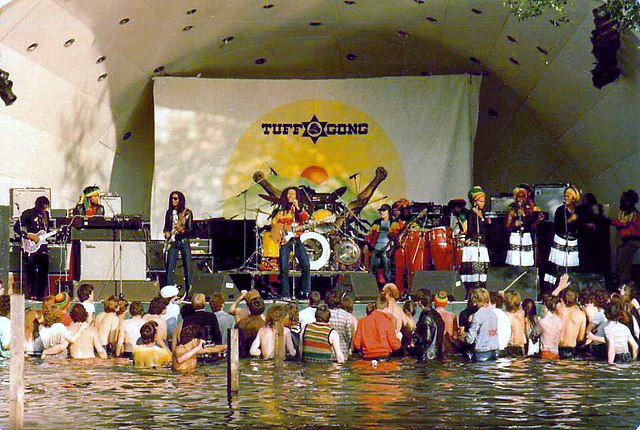 A Rastafarian or Rasta is a supporter of the Rasta- or Rastafari Movement. The name comes from Ras Tafari Makonnen, the name of the late Ethiopian emperor Haile Selassi

The origin of the rasta`s located in Jamaica, among the poor black population, which stood at the bottom of the social ladder by slavery past.

The movement originated around 1930 and was fueled mainly by Marcus Garve, who argued for black consciousness was and the repatriation of blacks to Africa.

Garve in 1914 made a remarkable statement.

The coronation made a big impression in Jamaica.

Rasta`s pointed to the prophecy of Garvey, who saw them as a prophet.

Because of the profound social disadvantage, Haile Selassie quickly became popular among the Jamaican population.

Rastafari`s believe in the divinity of Haile Selassi: for them it is the reincarnation of Jesus

The Rastafarian faith has no official doctrine and is therefore a very heterogeneous religion. There is no umbrella, such as, for example, a church rasta.

The name Rastafarianism is for many Rastafari`s a size insult if they want to be seen as an "-ism". They also see the Rastafarian himself not as a religion, but rather a way of life.

The Rasta Ethiopia sees as the promised land (Zion) where all blacks will ever return.

Rasta`s like to dress in the colors of the Ethiopian flag: red, yellow and green, colors that also occur in the rasta flag. Red stands for the bloodshed for freedom of Africa, green for fertility of the African country and yellow for gold and riches.

Marijuana plays an important role in the faith of the Rastafari`s. One smokes marijuana to meditate. Marijuana is probably taken by Indians from India and therefore called Ganja (the Indian word for marijuana) in Jamaica. Further reference is made to the sacred grass from the Bible and they believe that it grew on the tomb of the biblical King Solomon.

Rasta is a vegetarian and do not eat salt, and flavorings
He also avoids any association with death and did not go to funerals.
It is also for rasta`s forbidden to cut their hair.
This came the popularity of dreadlocks among supporters of African origin.

Reggae is separate from the rasta culture, although most Rasta`s use this music in their perception, meditation and meetings. However, many reggae singers (ash) groups and supporters of the Rasta faith.

The main one was Bob Marley

The influence of Rasta is reflected in some jewelery and clothes

The leaf logo remains popular, and the colors red / yellow / green in many bracelets and clothing reflected. Bob Marley has now become an icon.